It's so hard to say goodbye (NOT)- Xander's saga...the final chapter... 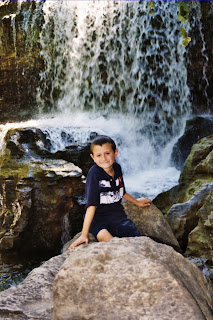 Hello Blogosphere! I am so excited to pass on this latest information on my son...but, first a bit of background. In October of 2007, Xanman was diagnosed with a disease called Eosiniphilic Esophagitis (say that five times fast!) At the time, we knew little about the disease and its treatment and were completely overwhelmed by the diagnosis to say the least. For more information about this disorder, check out www.apfed.org.
Basically, I learned that for five years I had been killing my son with his food. Turns out this sort of revelation does not make one feel particularly good about her mothering skills. We made changes to our diet, began to "eat only" chicken, rice, quinoa, millet, some veggies and some fruits. Everything else (and yes, this is no exaggeration) was off limits. We began a series of quarterly endoscopies with biopsies to check his progress and a heartwrenching back and forth of "he's better/ he's not".
At one point last winter, we were told that his only option for improvement in his condition was more medication, elimination of ALL foods and implantation of a stomach tube for feedings of elemental formula. Charlie and I discussed, and prayed and felt that this course of action, for us, was too extreme. So we took a different course. We discontinued meds, stopped quarterly scopes, started regularly chiropractic treatments and vitamin therapy and continued to follow a strict diet.
Today, I am happy to report that his Pediatric GI released him from further scopes. She said and I quote, "You are doing great...I don't think you need me anymore!" AMEN! I did a jig right there in the office.
Xander still has to follow a very strict diet and understands that his food choices can negatively impact his health, but he knows they are HIS choices to make and that is a powerful distinction. HE controls his health, not a doctor, or a health system, or even *gasp* me!
Thank you all for praying. We still covet those prayers, but are totally claiming this victory for the Lord!
Posted by Cari Kaufman at 9:35 PM

Cari Kaufman
I am an everyday woman...and that makes me extraordinary. I have two children that are God's greatest blessings to me and a fantastic husband. I am a certified personal coach and daily get the opportunity to help others reach for and achieve their greatest dreams.

For more info go to www.seegirllead.com

I'm a Lazy Mom! One of my new favorite blogs!